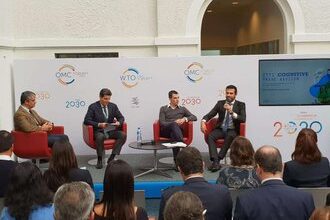 The International Chamber of Commerce used the 2018 World Trade Organization (WTO) Public Forum as the launch pad for an innovative technological tool. The Cognitive Trade Advisor (CTA) is a pioneering AI-powered application designed to enhance trade negotiations. The CTA uses the understanding of natural language in order to provide cognitive solutions that can largely improve the way delegates prepare for trade talks and carry out their negotiations.

The new tool results from the work of the Intelligent Tech & Trade Iniative (ITTI), a project led by ICC so that AI and blockchain may be increasingly geared to the realm of international trade.

Developed in partnership with IBM, the ITTI-CTA is a tech platform designed to read, scan, classify and interpret thousands of intricate provisions in trade agreements and related documents. It can do so in less than a second. By using IBM Watson®, the CTA will shorten the amount of time and improve the productivity and the quality of the preparatory work delegates devote to trade negotiations.

According to Daniel Feffer, Chairman of ICC Brasil and founder of ITTI, “The use of AI will optimize and improve cooperation in trade negotiations. The work we carry out in bringing AI technology and trade closer together will have its outreach expanded with the development of tools such as the CTA. Not only are we focusing on interactions and discussions involving tech and trade, but we present pilot projects that can become the starting point for the constitution of an AI-intensive trade ecosystem”.

“While traditionally trade negotiators would have to spend weeks and months in putting together and making sense of piles of trade-related information, the CTA can streamline negotiation dynamics. As a consequence, parties are able to dedicate more of their time to building consensus”, says Gabriel Petrus, Executive Director of ICC Brasil/ITTI, who led the CTA project.

The CTA emerged from actual and ongoing negotiations, namely the trade talks between Canada and Mercosur. It initially centers on the issue of Rules of Origin, the set of criteria used to ascertain the national source of a product. For the prototype, ITTI and IBM used previous trade agreements that Canada and Mercosur signed with different partners, totaling 700 hundred pages.

With the CTA, trade negotiators will also be able to better understand the strategies pursued by other trade partners. This will be made possible on the basis of automated analyses directed to sets of previous trade agreements signed by any given country. Users will also have the ability to identify the standards of rules employed for a certain industry in a particular trade agreement.

The CTA also encompasses a cognitive assistant named “Adam” — a smart trade expert who understands human language and can answer different questions about trade agreements, such as “what is the Rule of Origin applied for a certain product?”, or “which is the concept of de minimis in the EU-Canada trade agreement?” Adam will be the world’s first cognitive assistant available for trade negotiations.

The Cognitive Trade Advisor was formally launched at WTO Headquarters on October 2, 2018, at the WTO Atrium (Authors’ Corner), in a session starting at 2:30 pm. Later that day discussions followed in a Workshop titled “Shaping an Intelligent Tech & Trade Initiative – ITTI: Driving AI-Trade Interactions to Boost Global Prosperity”, that takes place from 5:00 pm to 6:30 pm in Conference Room F.